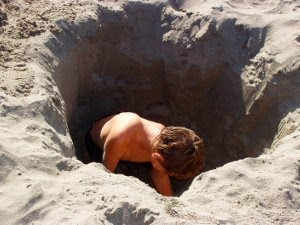 WATCH OUT FOR THE MEDIA! IT’ NOT ALL THAT IT CRACKS YOU UP TO BE

One of the things we most appreciate about the media, especially comedy TV shows, is that it cracks us up.

But Beware:  The media literally cracks you up…it puts cracks in your psyche…separating you from aspects of yourself, and cracks can easily develop into craters, chasms and canyons…given the right set of pulls, pressures and problems.

Then it’s just a hop, skip and a fall…into crators…

an easy misstep that will drive you into chasms (especially cata-chasms),

and an unconscious stumble that will get you lost in canyons of self-deception.

The craters grow from common misconceptions, the chasms from mutual delusion…and, the canyons from the rivers of denial.

Here’s the punch line…this should crack you up…

We, then attempt to solve our manifold problems from the fantasy space stations we created…

Our agreed upon assumptions, fed by our collusion with the media in creating never ending conflicts for fun and profit
..whilst we look for a handout from “wisdom”, but  unwilling to do the work wisdom requires to release its bounty.

The media sells, produces, feeds off of, and perpetuates conflict!

Create conflict, make it relatively unbearable and then sell the solution.

These are not new insights to any clear observer, but when we mistake all of that for “reality” and make choices based on all that “sound and fury”, we’ve become blind observers! The blind observers leading the…(you get the point.)

Media hides what is really happening…if it didn’t hide it, it wouldn’t be in business and keep you in busyness—too busy to actually see what’s happenin, but ever running on the treadmill of consumption!.

Consumer BeWare!
What Media doesn’t reveal, because it can’t, is that reality is composed of billions upon billions of transactions going in any given instant…and that’s just your own life.

As the media looks out at the landscape of existence (ever on the alert for geo-psychic faults”) generalizations are made, and if they’re massive enough and intense enough, they’ll show up as the News.

We then adjust our perceptions and conclusions about this generalized unreality and make choices accordingly… further removing us from “Reality.”   (Yes, if you’re thinking, “We’re nuts!” You’re right!)

So where can you go to find the reliable News that doesn’t depend on conflict as its most compelling ingredient…just like sugar is the most alluring ingredient in so much food (which creates all kinds of conflict in your body.)

Answer: To find the true news, go to what is actually new…the Now.

What is new is this moment appearing out of nowhere (not the perishable past).

Only what shows up in the Now is New!

But the only way you can get the “real news” is if you’re reporting “live“.

Now, both the good and the bad news is that in order to show up in the now, you have to leave behind all those assumptions, judgments, rationalizations, justifications, and misperceptions that block out “Immediacy” (Unfortunately, the foundations and fabric of your perceived existence, but not to worry, letting go of all of that is a “crack up.”)

engage what shows up

and let go of the part of the past that is still “dying for resolution” (un-forgiveness).

But Buyer BeAware!… “It’s never too late to show up in the Now!”