Insight Out – The Naked Truth A-F

Click any of the titles to listen to the podcast. 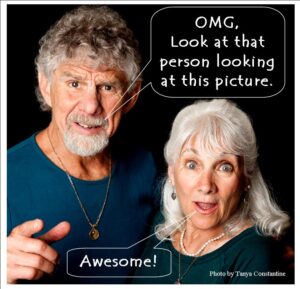 Like its predecessors, “heavy,” “cool,” “the bong,” “awesome” has become the word to express our surprise, wonder and appreciation for what occurs.

​ While I personally reserve the use of “awesome” for events like the big bang, the speed of light, the power of love and bar b q spare ribs, I’m willing to acknowledge how anything that triggers the “awesome” reflex is probably a good thing.

On the other hand, awesome can refer to events which, though perhaps mind-boggling, are not such good things: Climate de-stabilzation, the hydrogen bomb, and at the risk of sounding partisan (God forbid) that which lives in our psyche that

could actually want Donald Trump to be our president.

At the very least, “awesome” can interrupt the familiar ho-hum and trigger a new level of amazement for that which is beyond what we might have expected.

Rochelle (THE LADY IN THE PICTURE) has wanted to highlight “awesome” as our featured phrase of the week. So, in honor of her 77th birthday, we will immerse ourselves in the “awesome-ness” of life.  Look about you and within you find insights into the nature and wonder of existence and how it applies….to you 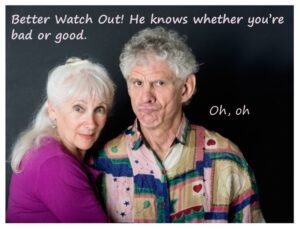 In the spirit of Christmas,”You Better Watch Out”   is the phrase of the week.

​Now, you may think that it’s because a magical, mysterious know-it-all elf is coming to town, but I’m not so sure about that. I haven’t believed in said elf since I was in third grade when I read Hegel and Schopenhauer.

But when I was in second grade I did believe in a magical philanthropic elf who evidently can ride a sleigh in mid-air because one Christmas I got a toy that I was sure my parents would never have gotten me.  Hence, it must be the fat, and very judgmental elf sliding down our chimney, albeit a Jewish one, who got me the unexpected Christmas gift.

And what’s with this “better not cry” business?  And that cold-hearted duality, “he’s knows whether you’re bad or good.” What a trip to lay on innocent children and all to satisfy their craving for stuff. Now, admittedly, I crave stuff, but I attribute it to the brainwashing I received as a child by the elf and his marketing minions. Yeah, it’s their fault.

But you know how what goes around comes around. I believe that the elf has morphed into Amazon,  and the reindeer’s–obviously UPS, USPS, the red-nosed Fedex man.

So, you better watch out, ’cause there’s lots to watch out for and it’s not all good…….. or bad…..whoops…see how easily it is to fall into the damn dualism.

In the meantime….. you better watch out….and you really don’t need a good or even a bad reason.