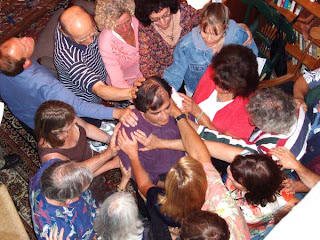 THE LAUGHING HEART,
A Vision for Radical Change

PURPOSE, PRINCIPLES AND PRACTICES, Part I

“A hands on approach to transformation”

From Bill Bradley and his book, The New American Story

“The only things that can stop us are fear, ignorance, self-centeredness, and greed.”

From Marianne Williamson’s Healing of America

“What we lack is an evolved sense of our collective purpose for our talent and intelligence.”
“But it feels as though there is no unified social force field for the effort, no number to call, no place to sign up.”
“We need a new vortex of social energy in America, one that arises from the shared intention of our society.”
“Minds in agreement form the most powerful force in the universe. To harness that force would constitute not so much a bridge as a super sonic transport into the 21st century.”
“They want to feel that they are contributing to a larger process, something bigger than themselves.”

The Laughing Heart is a response to this need…to be the “unified social force field for the effort, the number to call, the place to sign up, to be that super sonic transport” into the next millenium, and to provide the antidote to “fear, ignorance, self-centeredness and greed.” (Talk about “audacity”)

GOALS OF THE LAUGHING HEART:

To support and impact arguably the 5 major influences on the development and education of children: family, school, media, peers, religion.

To provide a home/context for those individuals who see to cooperate with evolution and want to both support and be supported by others in doing the same.

To provide the support, education and guidance for making these radical advancements.

To provide the foundation and educational technology to develop enlightened leaders

The Laughing Heart is both about creating context and content for personal awakening and social transformation.

I had a conversation with Barbara Marx Hubbard, author and futurist) several years ago when she suggested that those of us who are at the cusp of evolution (meaning that we’re probably broke but we do have a clue) have to create not only the creative content, but also the context to house it, since those contexts don’t really exist…yet.

If we consider the Spiral dynamics perspective, then we can appreciate that as we leave the first tier of evolution which includes (in order)

To a lesser or greater degree these six stages come about as a reaction to the limitations and the shadow side of the previous stage (meme), and the impulse to find better ways to gain control over the forces that seem to be preventing people from the “good” life. But since each meme has emerged in reaction to the previous one, they linger in relative resistance to each other—with little mutual understanding, lots of competition, subjugation, wars and a propensity to take themselves way too seriously.

Indeed, we are at the brink of moving to the Integral tier, where self or collective identity is not known by what it is not, but by what it is… It becomes who it is by mining, harnessing and directing its talents for the betterment of the whole (it being a part of that whole) without the necessity of distinguishing itself from the other value systems and life forms through separation. And separation usually involves some kind of domination/subordination system…up/down comparison, us/them, “Mine!” “No “mine!!”–variations of giving life the finger…or as Rodney Dangerfield said so eloquently, “I get no respect.”

This is why the Laughing Heart is about creating both the context and the content where integralism and its life affirming attributes can flourish.

The Laughing Heart is as much about place as it is about methodology, a place to congregate, grow, create and Be. And what makes it a “place” in this integral model is the community, specifically, the relationships we establish between ourselves and all of life.

(“Everything non-spiritual in human experience, excepting personality, is a means to an end. Every true relationship of mortal man with other persons–human or divine–is an end in itself.”—The Urantia Book)

In the emerging evolutionary paradigm, it is the community itself that forms the “place,” that is the new “church”, that forms the “new covenant” that establishes a basis for a new kind of agreement to take place which in turn sets the stage for a more cooperative and life enhancing society. Indeed, the Laughing Heart which is a combination of the place, the relationships and the dynamics, is the very setting of that stage.

Innertainers are the Laughing Heart Players.

Teilhard de Chardin predicted the coming of what he calls “human energy technicians”…at Laughing Heart, we call them “Innertainers“

“He (the human energy technician) becomes the technician and engineer of the spiritual energies of the world. The highest morality is henceforth that which will best develop the phenomena of nature to its upper limits. No longer to protect but to develop, by awakening and convergence, the individual riches of the earth.” Teilhard de Chardin

Traditionally in Judaism 10 “men” are required to form a minion… which is the requisite “context” for prayer (for some reason their idea of God needed ten guys, yes guys—but we’ve gotten beyond that. Jesus, being the efficient Jew that he was, got it down to 2… or more…because it only takes two to have an exchange). The Laughing Heart empowers that creative exchange (integral prayer). It establishes the holding space (like a womb, like the picture above) for our beloved self to emerge and for creation to occur. It also provides the tools, methods, principles, processes and the stage to practice and rehearse these dynamics, learn to excel in their use and prepare us to step onto the stage of life…without a net. (“Places, everyone”)

“…the morality of interpersonal relationships, for such is the seed and secret of the continued and purposeful growth of society and government, human or superhuman. “ The Urantia Book

Years ago I read that one of the main challenges for liberating atomic fusion is the difficulty of creating a container that won’t self-destruct when such a powerful conflagration occurs. So every place where the Laughing Heart shows up– whether live events, on the web, through media like video, audio and the printed word, in every relationship where there is true “meeting,” The Laughing Heart emerges simultaneously as the container, the context and the co-creative activities that precipitate the emergence of the True and Noble Self. The Laughing Heart is the container that allows for fusion—a way to hold, energize and sustain life. We are thus nourished and empowered to be with life without leaving an unhealthy “wake” as the aftermath of our being together, but rather to leave us “awake” as we pass through each other’s lives.

The context of humanity is so filled with discord, competition and separation (duh) that we need to prepare ourselves for this next step of fusion power, to establish the context that supports individuals and families to actually be the “containers” for the emergence of a more soulful awareness which provides a fertile soil for progress…and we need to rehearse our new roles!

“HOW THE LAUGHING HEART WORKS”

“WHY WOULD YOU WANT TO PARTICIPATE IN THE LAUGHING HEART?”

“WHO ARE YOU KIDDING?”

Check out our live radio show, “Insight Out” with Errol & Rochelle Strider every Sunday at 7 PM (PT) on http://www.utopiaradio.com/ or go to our web site and click on archives of our past programs
—
Errol Strider
(415) 459-4512
http://striderinnertainment.com/
estrider@gmail.com

One response to “A RADICAL PERSPECTIVE FOR AN EXTREME TIME!”