Don’t Get Me Wrong

Don’t Get Me Wrong 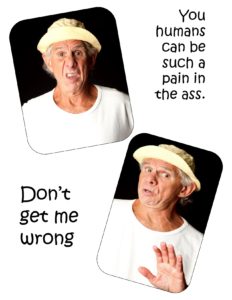 ​Right and wrong.  Good and bad. Moral. Immoral. These are just some of the light topics we’ll engage in related to this week’s focus.  Don’t get me wrong.  We’ll get into our normal heavy topics for you philosophical junkies out there. Not to worry.

But as Moliere said, “It infuriates me to be wrong when I know I’m right.”

You know who Moliere is, I trust. He was a famous French Swiss cheese maker in Northern France.

Actually, Moliere was a 17th century French playwright considered to be one of the greatest masters of comedy in Western literature.  He made fun of many of our human traits like throwing your computer at the wall when it doesn’t write funny stuff. Just kidding, I know he used a typewriter.

So, if you’ve ever felt wronged or if you think everybody else is wrong, join us for the podcast,  have some laughs, music, our array of “Delightened” characters and our usual twists of metaphysical notions and speculations.

Moliere also said, “People don’t mind being mean; but they never want to be ridiculous.” (wish I said that)

Don’t get me wrong. The problem with being wrong is that people might just think you’re ridiculous, but if that bothers you, you can just be mean.

Grab a Hamburger Kale sandwich, get comfy and tune in.

Click  Don’t Get Me Wrong to listen to this program.